Sean Davison Struck Off in NZ

Cape Town – Euthanasia advocate Professor Sean Davison’s plans to move back to his birth country have been abandoned after he was charged with professional misconduct and struck off the medical register in New Zealand.

He said he still failed to understand why “helping three men to end their unbearable suffering” made him unfit to practice as a “medical scientist”.

Currently serving a three-year house arrest sentence after accepting a plea bargain for the murders of Anrich Burger, Richard Holland and Justin Varian, Auckland-born Davison is also known worldwide for helping his 85-year-old mother Pat to die in 2006 during a prolonged and painful battle with cancer.

The 59-year-old scientist appeared before the Health Practitioners Disciplinary Tribunal on Tuesday via video link from Cape Town, where New Zealand press reported that the tribunal heard Davison say he wished to move back to the country.

Davison said the charge makes him “unemployable” in New Zealand. 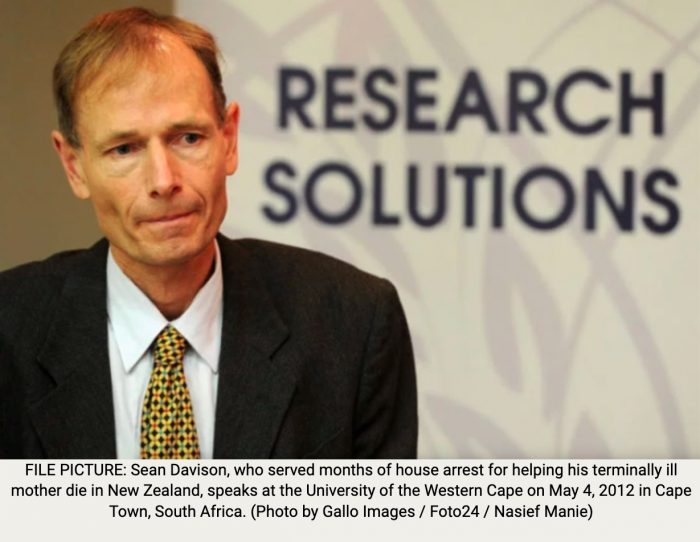 He lives in Pinelands and has three children.

“Our family was thinking about moving back, but the professional misconduct charge makes me unemployable in New Zealand.

“It is standard practice in New Zealand that when its citizens receive criminal convictions in another country the charges are transferred.

’’This is what happened in my case, even though I have been a South African citizen for 25 years.

’’I don’t agree with this practice since my murder convictions were in a plea-bargain context and it is wrong to automatically transfer such a conviction to another country. The murder charge should have been tested before a jury in New Zealand,” Davison said.

Davison is also the co-founder of assisted-dying organisation Dignity SA.

Co-founder Professor Willem Landman said yesterday the organisation has not yet met to discuss the development and could therefore not comment.

As part of his house arrest, Davison may leave home to go to work, to church and to the doctor.

He is a professor at UWC’s biotechnology department.

“The university is bound by the parameters of its HR policies and the relevant labour laws of South Africa.

“The university will therefore not comment on this matter,” Abarder said.

Davison pleaded guilty to killing Burger in 2013 by administering a lethal amount of drugs to him; to killing Holland in 2015 in the same way; and, on a third murder charge, he admitted to killing Varian by helium deoxygenation and/or asphyxiation.

He said yesterday that walking away from people who reached out to him for assistance was turning a “blind eye and condoning their suffering”.

“I am very disappointed by this decision and fail to understand why helping three men to end their unbearable suffering makes me unfit to practice as a medical scientist.

“In New Zealand many people said I should have done nothing and walked away from those three men, but doing nothing is doing something – it is turning a blind eye and condoning their suffering,” Davison said.

Note – Professor Davison will be interviewed by Dr Fiona Stewart for the Doxit Podcast on Sunday 23 August 2020.