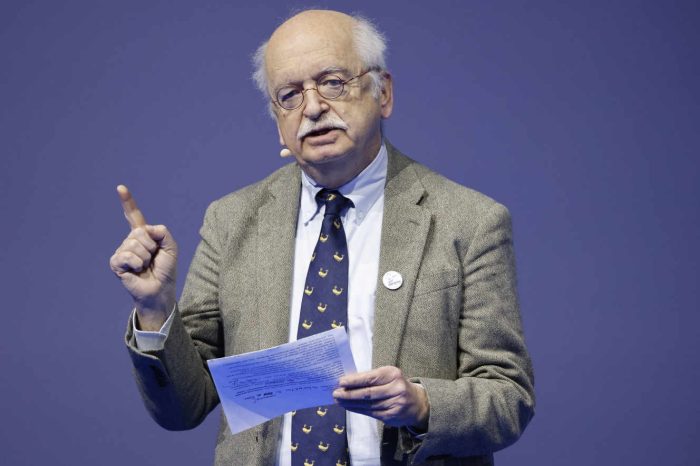 French writer Erik Orsenna speaks during the Hight Level Segment session of the One Ocean Summit, which seeks to raise the international community’s ambitions to protect sealife, cut plastic pollution and tackle the impact of climate change, in the northwestern France port city of Brest on February 11, 2022. (Photo by Ludovic MARIN / POOL / AFP)

Less than two months ago, writer Erik Orsenna was invited to lunch at the ministry of health by Agnès Firmin Le Bodo.

The deputy minister for healthcare professions was elected in the port city of Le Havre for many years.

She shares a love of the open sea with the writer-sailor. The subject that brought them together that day was not the sea but death.

The minister suggested that the “immortal” Orsenna – as members of the prestigious Académie Française are known – design a lexicon of words related to the end of life.

The glossary is to be delivered before the end of the citizens’ convention on the topic, in March, when the group of randomly-drawn citizens will deliver an opinion on whether or not to legalize assisted suicide or euthanasia.

Mr. Orsenna accepted the challenge, but suggested that nine other figures collaborate with him in preparing the glossary. “The deadline will be in February,” said Ms. Firmin Le Bodo.

French experts to develop glossary ahead of legislation – Why is such a glossary necessary?

In order to achieve a “peaceful” national debate on the “end of life”, as President Emmanuel Macron put it.

“We needed definitions of certain words that were accessible and understandable to all French people,” explained the minister. This led to the idea of asking specialists to clarify “the meaning of expressions such as ‘assisted suicide’, ‘active aid in dying’, and ‘continuous, deep sedation,'” listed Ms. Firmin Le Bodo.

The group met for the first time on December 12. Mr. Orsenna was joined writer and sociologist Noëlle Châtelet, author of La Dernière Leçon (2004, “The Last Lesson”); psychologist and psychoanalyst Françoise Ellien, who is a specialist in palliative care; sociologist Philippe Bataille, who is director of studies at the Ecole des Hautes Etudes en Sciences Sociales; and Elsa Walter, author of A vous, je peux le dire. Ecouter les mots de la fin (“I Can Tell You. Listening to Final Words”).

A volunteer with end-of-life patients, Ms. Walter is the spokesperson for the group.

Read more on the French situation on the Peaceful Pill Handbook Website.