Spain has passed a law to legalise euthanasia, becoming the fourth country in Europe to allow people to end their own life in some circumstances.

Spain’s lower house of parliament approved the law with support from centre and left-wing parties on Thursday.

The law allows adults with “serious and incurable” diseases that cause “unbearable suffering” to choose to end their lives.

It is expected to take effect in June.

Before the law’s passage, helping somebody to die in Spain was potentially punishable by a jail term of up to 10 years.

“Today we have become a country that is more humane, fairer and freer,” Spanish Prime Minister Pedro Sánchez tweeted just minutes after the vote. “The euthanasia law, widely demanded by society, has finally become a reality.”

The passage of the law was celebrated by right-to-die campaigners, but condemned by conservative and religious groups.

What happened in parliament?

Lawmakers from the Spanish parliament’s lower house passed the law, with 202 votes in favour, 141 against and two abstentions.

Spain’s minority coalition government, which is led by Mr Sanchez’s Socialist Party, had to seek the support of other parties to pass the bill.

Outside parliament, groups for and against the bill demonstrated during the debate and the vote.

Danel Aser Lorente, a 45-year-old film lecturer whose mother had Alzheimer’s and was denied the right to end her own life, was pleased with the outcome.

“From today, we Spaniards will be able to sleep easier, feeling a bit more free,” he told the AFP news agency.

But the law faces staunch opposition from far-right and religious groups that believe euthanasia is wrong.

The far-right Vox party has said it will challenge the law in Spain’s Constitutional Court. 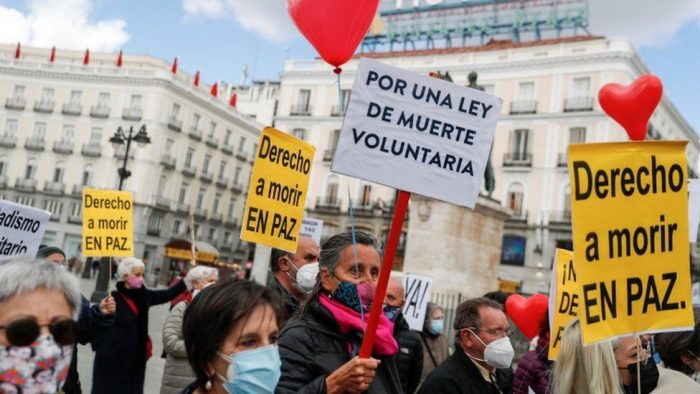 What does the law allow?

The Spanish law permits two voluntary means of allowing a person to end their own life: euthanasia and assisted suicide.

Euthanasia is the act of intentionally ending a life to relieve suffering – for example a lethal injection administered by a doctor.

In cases of assisted suicide, the act is undertaken by the person themselves with help.

What’s the difference between assisted suicide and euthanasia?

To request either, the person must:

A doctor can reject the request if the requirements have not been met. It must be approved by a second medic and by an evaluation body.

Any medic can withdraw on grounds of “conscience” from taking part in the procedure.