The First Place in the World

On 1 July 1995, the Northern Territory of the Australia became the first place in the world to pass an assisted dying law.

The Rights of the Terminally Ill Act  (ROTI) was that law.

On 1 July 1996, the full implementation of the law occurred.

On 22 September 1996, the law was used for the first time when Darwin local, Bob Dent, who was suffering from prostate cancer, became the first person in the world to receive a legal lethal voluntary injection. 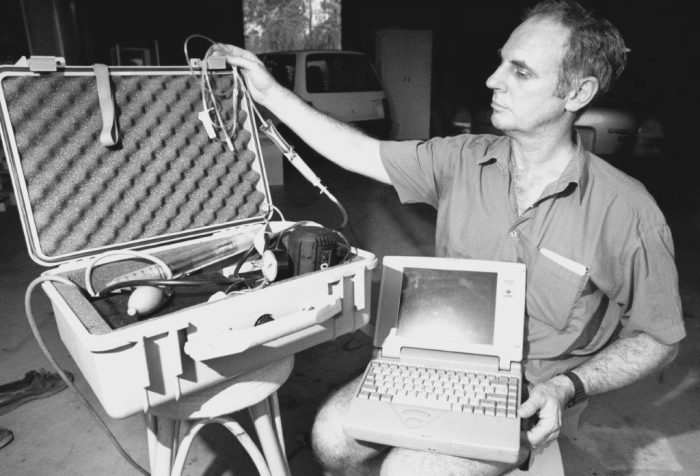 The Northern Territory was the first place in the world because Oregon’s Death with Dignity Act was waylaid by legal action and was not used until October 1997.

The Netherlands’ Termination of Life on Request and Assisted Suicide (Review Procedures) Act was not passed in law until 2001 and was not used until 2002.

This left the little-known, Northern Territory of Australia alone as the first place in the world where a doctor could lawfully assist a dying patient to die.

However, the NT ROTI Law only lasted 9 months before it was overturned by the Euthanasia Laws Act (known colloquially as the ‘Kevin Andrews Act’).

This law came about as a result of a private member’s bill. The sponsor of that bill was the conservative, catholic Liberal Party MP from the Melbourne seat of Menzies, Kevin Andrews. 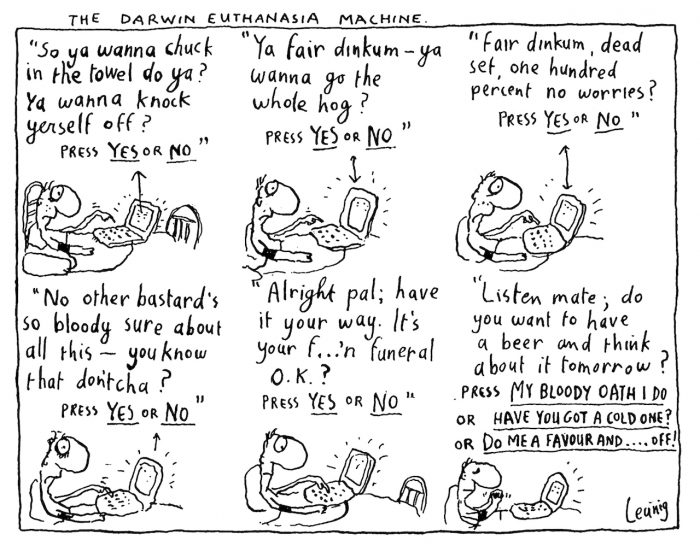 This is to say that Andrews used an historical quirk in the Australian Constitution (section 122), which allows the Federal Parliament to make laws for the Territories of Australia (the Northern Territory, the ACT and Norfolk Island).

Put simply, the Euthanasia Laws Act disallowed Australia’s Territories to make laws on voluntary euthanasia. Despite being the first place in the world, the NT can make laws on anything, but not euthanasia.

Above all, this was a cynical, political and strategic way to deny Australians choice at the end of life and it worked.

The Euthanasia Laws Act was put to a conscience vote and was voted through by both the then conservative Prime Minister John Howard and the Leader of the Opposition, Kim Beazley. 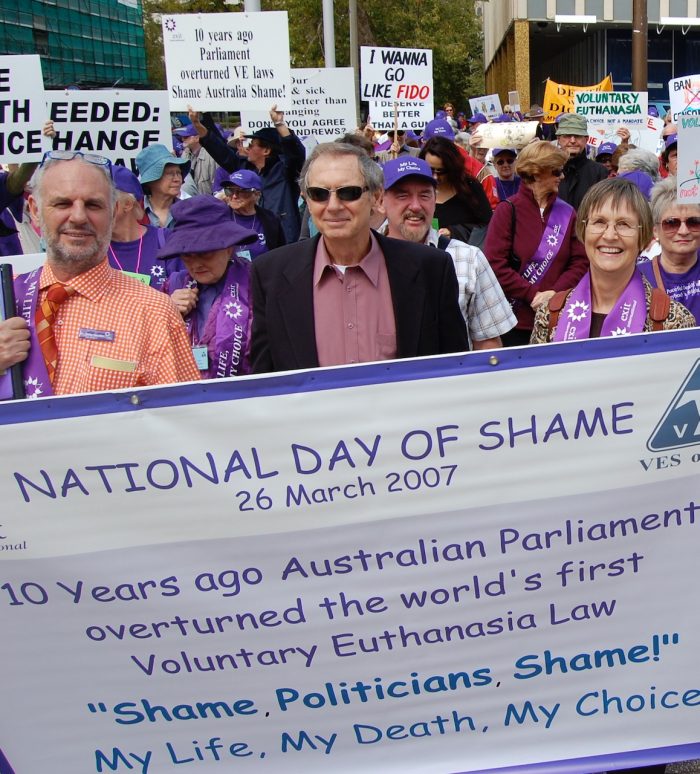 In 2021, some 26 years later, there is finally a push underway for the Euthanasia Laws Act to be amended.  Most importantly, this time, the Murdoch press is behind the push.

In the Northern Territory News this week, a full 4 days of lead articles urging the Federal Parliament of Australia to act.

Yes, it is indeed time … 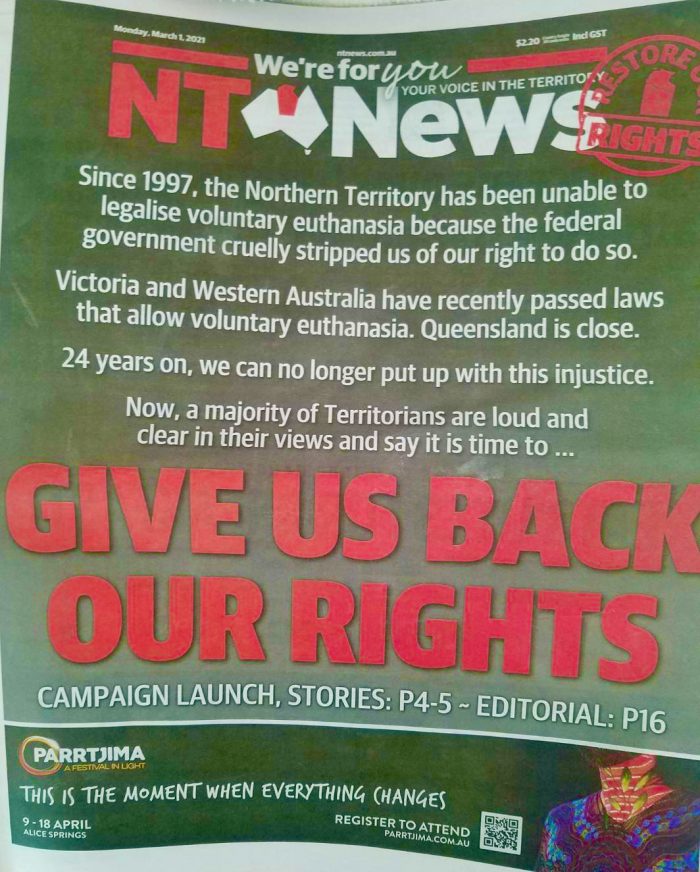 Why was the Northern Territory the First?

In Killing Me Softly: Voluntary Euthanasia and the Road to the Peaceful Pill (Penguin, 2005), authors Philip Nitschke and Fiona Stewart set out to try to explain why the Northern Territory did it first.

In watching the enactment of VE bills elsewhere in the world since 1997, I have come to realise that certain ingredients are required for the successful passage of a law on VE.

For example, we had a charismatic politician who was prepared to stand by his beliefs.

More than this, though, Marshall Perron was something of a legend in the Territory.

His long involvement with Darwin gave him unique insight into the Territory psyche; something he was able to put to good use as he carved out his successful political career.

Perron is also a straight talker.

He doesn’t mince words and can be a powerful force in any debate. He has that admirable talent of taking the people with him.

A politician from the conservative side of politics, his leadership on VE reinforces the fact that the issue is beyond party politics. One’s right to die transcends political divisions and ideological differences.

A second factor in the initial success of the ROTI Bill in the Northern Territory parliament is that they have no upper house.

This makes the passage of legislation more efficient.

The government of the day is all the more powerful when the checks and balances of the house of review of the traditional Westminster system are absent.

This was the case in 1995 in the Territory and it worked in voluntary euthanasia’s favour.

A third factor that helped get the ROTI Bill through is that the Northern Territory is the least religious place in Australia.

According to Social Trends 1994, 18 per cent of the Territory’s population consider themselves to have no religion.

This compared to 10 per cent in New South Wales and a national average of 12 per cent. Territorians are also the most likely people to leave the religion question in the census unanswered.

Finally, the Territory has a mindset that is different from everywhere else in Australia.

In this part of the world, car registration plates contain words like ‘Frontier’, ‘Barra Country’ and ‘Outback’ – words that conjure up Territory fact and myth. And this is the point.

Territorians can be rough, rugged and cynical as hell about the gentrified south.

In some ways, the Territory welcomed a VE law precisely because no one else had one. No other state or territory was tough enough to find a legislative way to deal with this political hot potato. 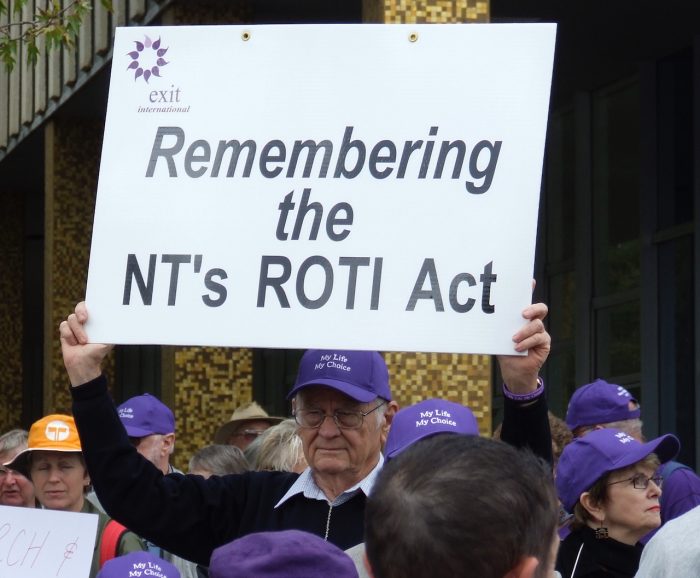 Demonstration in Canberra, March 2007 on the 10th Anniversary of the overturning of ROTI Act