In January 2022 Exit Director Philip Nitschke was contacted by the ‘Let’s Get Psyched’ radio show and podcast series which is hosted by a group of psychiatrists/ psychologists at the University of California, Riverside with an invitation to take part in their program.

‘We would like to invite you to join us for a future recording!’

Philip accepted the kind invitation. A Zoom interview call was subsequently held and the Podcast recorded. 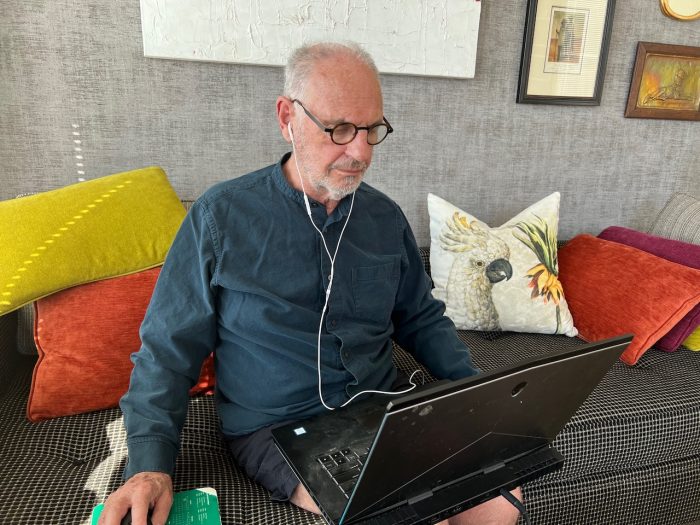 Around the same time, the team posted the podcast to their regular Podcast platforms (the same as used by Exit) including Anchor, Google, Apple etc. 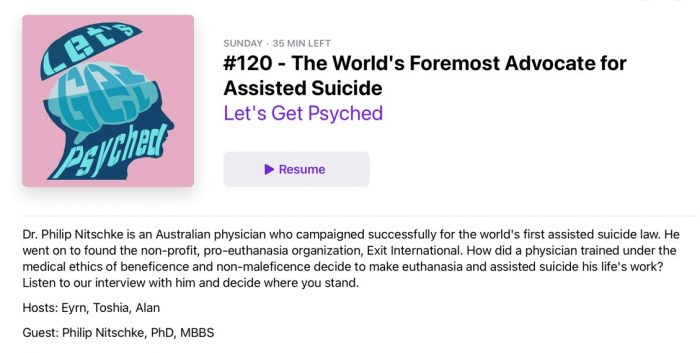 On 16 January 2022, he received the following kinda sweet ‘thank you’ note. 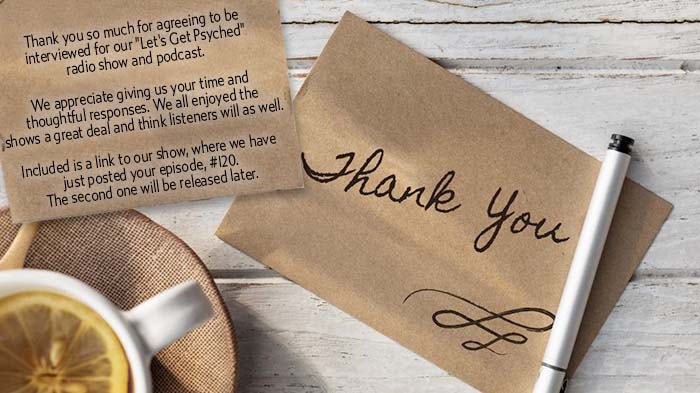 However, within days, the link to the Podcast with Philip’s interview stopped working.

Indeed, on closer inspection, not only was the link faulty but the whole episode had mysteriously disappeared only to be replaced with an interview with a medical ethicist from the University of Nevada, Las Vegas.

Initially, Exit thought the link that the team had posted an incorrect link on Twitter. An innocent enough mistake.

But then something more nefarious emerged.

When Philip queried the link with Let’s Get Psyched, he received the following reply.

Thank you for reaching out. We apologize for the delay in response. We really appreciated the conversation you had with us and your candor. We aired both episodes on our radio station KUCR and had the first episode up online for about a week, but over that time period, our group became divided about the episode. We also received listener feedback expressing concern about the episode. We decided to take it down while we try to come to an agreement. We wanted to resolve the disagreement amongst ourselves before proceeding further. We apologize for not notifying you about the change and the confusion that has caused.

Thanks for the background

I have heard no more over the past 10 days

Does that mean attempts to ‘try to come to an agreement’, and ‘resolve the disagreement amongst yourselves’ have failed?

I hope you’ve been well.

I sincerely apologize for how long we are taking with this process. I did feel bad both this time and last time about how long we took to get in touch with you. We have been working on it consistently. We have never dealt with an issue like this before, so its a bit of a discovery process. Each matter has to be discussed and agreed upon between us before we advance it, but due to our disagreements on it, and wanting to make sure we do the right thing by you and by our audience, we have involved two bioethicist mentors, one of whom has not gotten back to us yet. We are a tiny operation consisting of residents and a psychologist, with no funding and our medical jobs to attend to first.

If you desire, I’d be happy to do a phone call with you to discuss your thoughts on the matter and your preferences as well as update you on the details of our concern.

We really enjoyed meeting with you and hearing your ideas, appreciate the time you took, and are hoping to have an end to this soon for all of our sake.

Thank you for your patience with us! I think it will make more sense once we share more about our conclusions and thought process. I forgot if i mentioned this, but it takes us a long time because coming to a consensus on things we all care about (like the topic of this episode) requires waiting for each of us to have the time to convene and complete our action items, etc. We like to process with various phone conversations and such, and are still sort of figuring out our own feelings as we go. Thought provoking stuff you brought us. We’ll be in touch.

Thanks,
Appreciate the information.
No need to call – somewhat resigned… although surprised, I imagine my views on these issues would have been known and..
I’m a little unclear what it is about the discussion that requires the involvement of 2 bioethicists. In what capacity? but..
What we would really appreciate is a short statement re the basis of the decision so that we could provide it to our members who have been asking – possible?
regards
philip

We appreciate your patience as we continue to work on this. I have been emailing people multiple times a week since mid January in an effort to conclude this matter. We imagine you are pretty busy and would appreciate a quick resolution.

At the time of publication – today 6 March 2022 – it is around 2 months since the Podcast was recorded.

This is more than enough time – surely – to sort out internal editorial censorship issues.

Philip Nitschke is a known quantity.

Why invite him to speak if his ideas are so dangerous that the podcast will not be able to be published?

Why waste his time?

If one were to accept that his views are dangerous (to some ears), where does this leave the First Amendment?

Why have Let’s Get Psyched turned to censorship?

What is it that their ‘bioethicist mentors’ could have brought to their decision-making process that they themselves were seemingly unable to agree on?

Is this conflict resolution between disagreeing psychiatrists?

Or is this children in the playground who need parental supervision about how to dig their way out of their self-made sandpit?

Or – more cynically – is the medical profession showing itself incapable and unwilling to countenance any point of view that challenges medical supremacy (and paternalism) in the assisted dying debate?

Either way, and with due respect to the team of psychiatrists, psychologist and registrars involved, this does not give one much faith (or hope) in the mental health profession.

On a brighter note, Exit preserved a copy of the Podcast interview and is pleased to publish it on the Exit website.

We apologize to those who reached out to Exit with complaints about the faulty link and the inconvenience of not being able to access the tweeted podcast.

But as you can see from the above, the matter was out of Exit’s hands.

Listen Now to the (Un)Cancelled edition of the Let’s Get Psyched Interview with Philip Nitschke.

And decide for yourselves just how dangerous the podcast really is …