This week the Godfather of the Assisted Suicide movement, Derek Humphry, made an unfortunate, but significant, omission in his chronology of the history of Assisted Suicide laws up to and including June 2019.

Exit is certain that this was nothing more than a sleight of the pencil, but in these days of ‘alternative facts’, the truth matters more than ever!

The first place in the world to allow a doctor to administer a legal, lethal, voluntary injection to a patient was the Northern Territory of Australia.

The Rights of the Terminally Ill Act was conceived and presented to the Northern Territory by then Chief Minister, Marshall Perron. The ROTI Act was enacted 1 July 1996.

The Rights of the Terminally Ill Act lasted only nine months before it was overturned by the Euthanasia Laws Act in the Australian Federal Parliament. This Act became known as the Kevin Andrews Act (named after the conservative catholic politician from Melbourne who presented the Private Member’s bill to the Parliament).

The law was able to be overturned thanks to Section 122 of the Australian Constitution. This historical quirk allows the Federal Parliament to make laws for the three territories of Australia. This Section does not apply to the States of Australia.

In his email blog on 14 June, Derek wrote:

‘Various forms of medical assisted dying have been approved in the following  states and nations.  Each law has its own limits, rules and guidelines.  All but Switzerland forbid foreigners this type of help to die.  Only Canada,  the Netherlands, Colombia and Belgium permit chosen death via doctor lethal injection as well as oral ingestion; all others are by doctor prescription which the patient drinks. A  policy statement in England gives clear guidance when helping another to die would not be prosecuted, but there is no law.’ 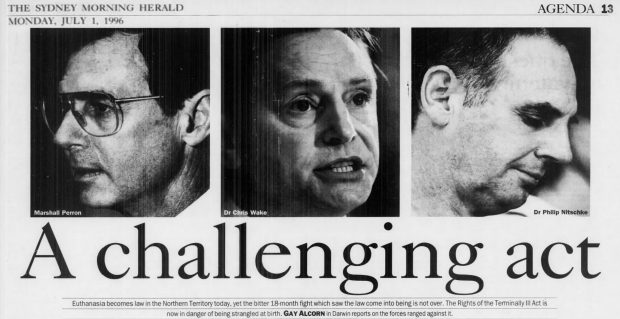 The 9 US states are  starred*: